I’m repeating a blog which I posted on Christmas Day last year. It’s about the inventor of modern beekeeping, L.L. Langstroth. Enjoy! 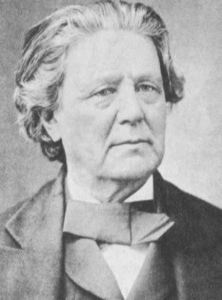 He invented modern beekeeping, making it easier, more productive, and less stressful for bees. However, Lorenzo Lorraine Langstroth earned nothing from his invention and suffered severely from self-doubt, melancholy, and clinical depression. Yet, he changed beekeeping to its core and on his birthday anniversary (Christmas Day!) we give homage to the most important beekeeper America ever produced.

Langstroth was born December 25, 1810. That was some Christmas gift to the world, wasn’t it? His childhood seems to have been typical for a kid who spent a lot of time on his hands and knees on the streets of Philadelphia, trapping bugs and ants with table scraps. “I was once whipped because I had worn holes in my pants by too much kneeling on the gravel walkways…