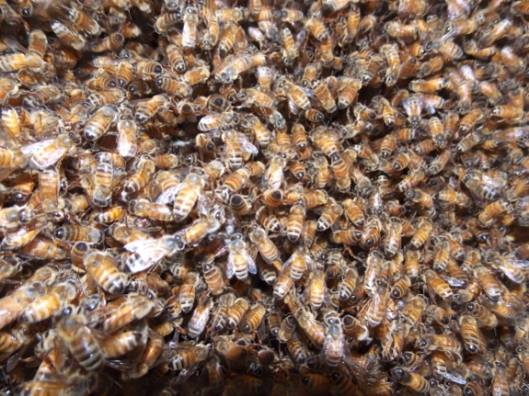 Let’s say you were going to open a new business and wanted to hit the market with a bang on day one of shopping season – say black Friday or whatever. You’d have to start preparing for that day ahead of time. How far ahead of time? You really don’t want to hire employees too soon and not have anything for them to do for months. Instead you want to hire them just enough ahead of time to get them oriented to their new jobs, well trained, and ready to service mobs of customers exactly on your Grand Opening date.

The same applies to your honey bees. Grand Opening date is the day the nectar flow begins in earnest. We can never know exactly when that date is as nature deals us a slightly different set of circumstances each year. But seasoned beekeepers in your area can give you a good estimate of the date nectar flow begins and ends in your area. Your job, as the beekeeper, is to have a full staff of employees ready and trained to gather that nectar starting on day one of the season. You’ll also have to worry about employee retention and expansion over the course of the nectar season. Finally, you’ll have to curb hiring as the season diminishes so that you’re not squandering resources on employees that will never gather nectar.

Here in the Midlands of South Carolina most seasoned beekeepers recognize the beginning of the spring nectar flow as April 1st. This year it appears to be running ahead of schedule. For the purpose of this article we’ll say April 1st and you can adjust for your location and observations. A 3 week old foraging bee available to work on April 1st has already graduated through the various stages of nurse bee, house bee, wax producer, etc. Prior to that she spent 21 days as an egg, larva, and pupae. So exactly when did you need your queen to lay that egg to produce that foraging bee available for work on April 1st? Bee math tells us she needed to lay that egg on approximately February 14. This is easy to remember as it is Nicolai Nasonov’s birthday. But wait, if the queen lays 1,200 eggs per day and does so on February 14 that results in 1,200 foraging bees on April 1st – but we want more than 1,200 bees don’t we? No worries, she didn’t go from 0 to 1,200 in one day. Instead, she’s been increasing her output since the winter solstice. But my point is February is critical for the beekeeper to stimulate production if he or she wants to have a full staff of foraging bees to get the job done in a manner that produces excess honey.

The same math can be used to determine when to start curtailing hiring new employees (bees) during the nectar flow. Our Midlands nectar flow ends approximately June 1st – a brief 2 months from its start date. An egg laid on April 19th will become a foraging bee on June 1st. That’s simply too late to contribute to nectar gathering. But that same bee will eat as much as any other bee in the hive and required the same amount of nutrition and work to create. Now here’s the dilemma, that colony is going to be in full tilt workaholic mode during the course of the nectar flow. It’s all hands on deck and as long as nectar is coming through the front door the queen will continue to lay eggs. The colony will continue to build and build bees because they have all the resources to do so. And the summer solstice isn’t until June 21st so that’s of no help. If you’re still hiring bees after April 19th you’re setting yourself up for having to feed those non-productive bees during the remainder of the nectar flow as well as the coming summer dearth. That means less excess honey for you.

What’s a beekeeper to do? A couple ideas might be to use that nectar flow time after April 19th to create a brood break by caging the queen. This would benefit the colony by reducing mite count via a brood break. A second option might be re-queening your hive allowing for a brood break. Moving your queen across the yard and allowing them to requeen would provide an almost perfect 25 or so days with out new brood. (Your queen across the yard is your failsafe.) Another option might be to “steal” frames of brood and get an early start on summer splits. The number of cells in a deep frame is around 7,000 although there is honey and pollen taking up some of the cells. Nevertheless, taking a frame of open brood, a frame of closed brood, and a frame of honey will hardly set an expanding colony back much and should result in an increase in your honey yield due to fewer mouths to feed. Plus you’ll get another colony, a new queen, a break in mite production, and a backup colony should anything go wrong in the fall. And with the nectar flow still in progress everything goes easier – wait until dearth comes and the same tasks will be much more difficult.