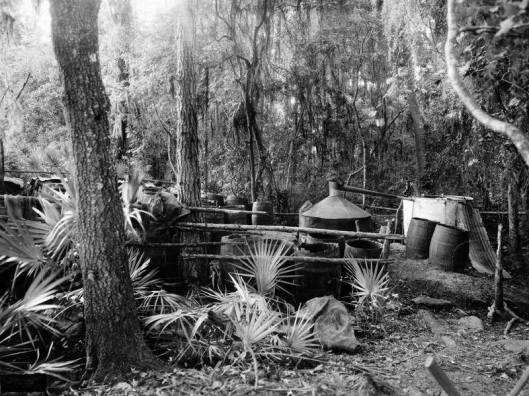 1931- ‘Bootleggers Destroy Apiary’
…
Image: Beekeepers across America frequently found themselves keeping bees in the same remote locations where moonshine stills were hidden. This still is located in Southern Georgia where beekeepers set up apiaries to collect Tupelo Honey.

Moonshiners needed to place their stills in remote areas near a reliable source of water. Beekeepers also needed to situate apiaries near water and in remote areas where forage was abundant. This occasionally placed beekeepers in direct conflict with moonshiners. In 1931, revenue officers destroyed three whiskey making outfits in the swamp behind an apiary of 85 colonies owned by Mr. Scott of North Carolina. Although Mr. Scott did not know the stills were there, the bootleggers piled up thirty- seven of his colonies and burned them and turned most of the other hives over on their sides. All this was done because the bootleggers suspicions that Mr. Scott had given information as to the location of the stills. -Raleigh, North Carolina -Bee Culture Magazine, 1931.