The Mystery of the Missing Spiracle (Pair)
by Staci Siler

It read like the gravest of murder mysteries.  There was a spiracle missing on the side of my honey bee.  The book I read said it was supposed to be there but it was conspicuously absent.  What was wrong??  Was I looking at a serious mutation in my bee?  Was it contagious?  What was going on!!!!!  Where was that spiracle?

It would be nice if the answer were easy…  Or rather, I should say the answer is easy…. but complicated.

To get to the answer to the question of two or three spiracles on the thorax, we have to learn a little about honey bee biology.  A spiracle is, basically, a hole in the side of the honey bee through which the bee breathes.  When the bee is a young larvae, there are ten spiracles along the side of it’s body — two on the thoracic region and eight on the abdomen.   As the honey bee grows, a ‘waist’ develops which separates the thorax from the abdomen but it starts right below the first segment of the abdomen.  As such, anatomical pictures of the adult honey bee look like this: 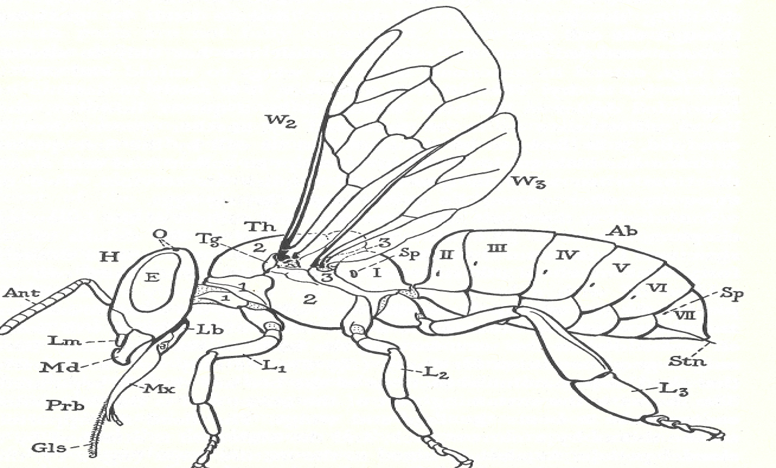 On this picture, you can see that the Roman numerals, which number the segments of the abdomen, start at I on the thorax, where the third spiracle is at.  As such, it would be technically correct to say there are two spiracles on the thorax but….  it would also be accurate to claim three spiracles to the ‘thoracic area’ or claim three by acknowledging the way the first abdominal segment is positioned on the thorax.That did very little to solve the initial question though as we are still left with a missing spiracle.  So… if the larvae started out with ten spiracles, where did it go?

Here is a picture of the young larvae, with all ten spiracles marked as dots along the centerline of the larvae. 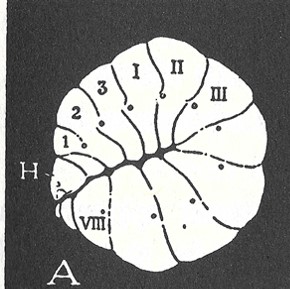 Note: only spiracles one through nine are listed.

The latest addition of the Hive and the Honey Bee lists the tenth spiracle as located in the spiracular plate associated with the base of the sting and, given it states there is a way for the spiracle to stop the escape of air, it lends credibility to the thought that the tenth spiracle, though often forgotten, is functional.  There is no notation for it in the above picture but other texts list it as having the second largest opening of the ten spiracles which would imply it is anything but vestigial.

So… we have found the missing spiracle.  You won’t see it if you put a magnifying glass on the bee’s abdomen but the tenth spiracle does exist, it is just not readily visible unless you are willing to get up close to the honey bee’s sting — an area beekeepers generally try to avoid.

Which is the more accurate answer?  Two or three, nine or ten??

I guess, as long as you take into account every reason for the differences (nine visible, ten functional — three on the thorax if acknowledging the transfer of the abdominal segment, two on the actual thorax) you could say any one of those variations and be correct… Technically…..

Ref: R.E. Snodgrass, Honey Bee Anatomy
Staci Siler is a Master Beekeeper living in South Carolina. She teaches all levels of beekeeping classes and frequently speaks at beekeeping associations across the state. She is the current Secretary of Mid-State Beekeepers located in the Midlands of South Carolina.
Advertisement