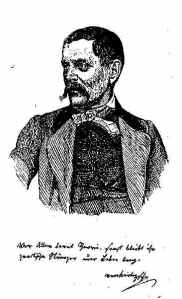 Baron August von Berlepsch a dedicated apiarist dedicated himself to study and built upon the works of other prominent beekeepers of his time. Probably most importantly Johann Dzierzon’s discovery of the exact space which we now refer to as bee space. “In 1848 Dzierzon introduced grooves into the hive’s side walls, replacing the strips of wood for moving top bars. The grooves were 8 × 8 mm—the exact average between ¼ and ⅜ inch, which is the range called the ‘bee space.’ On the basis of the aforementioned measurements, August Adolph von Berlepsch (de) (May 1852) in Thuringia and L.L. Langstroth (October 1852) in the United States designed their frame-movable hives.” (Wikipedia)

Thus Berlepsch edged out Langstroth by 5 months on the invention of a removable frame hive utilizing bee space to the benefit of the beekeeper.

The following text is an extract – introduction from his work published  (3rd edition 1873). The technical part would go beyond the scope of a homepage. The book may be borrowed from well-assorted public libraries.

The Honey Bee and its Breeding in Movable Honeycombs in Regions without Late Summer Yield.

My Life as an Apiarist