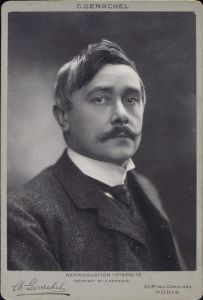 Maurice Polydore Marie Bernard Maeterlinck[1] (also called Comte (Count) Maeterlinck from 1932;[2] [mo.ʁis ma.tɛʁ.lɛ̃ːk] in Belgium, [mɛ.teʁ.lɛ̃ːk] in France;[3] 29 August 1862 – 6 May 1949) was a Belgian playwright, poet, and essayist who was a Fleming, but wrote in French. He was awarded the Nobel Prize in Literature in 1911 “in appreciation of his many-sided literary activities, and especially of his dramatic works, which are distinguished by a wealth of imagination and by a poetic fancy, which reveals, sometimes in the guise of a fairy tale, a deep inspiration, while in a mysterious way they appeal to the readers’ own feelings and stimulate their imaginations”. The main themes in his work are death and the meaning of life. His plays form an important part of the Symbolist movement.

From Amazon.com on his book titled, The Life of the Bee.

In an exuberantly poetic work that is less about bees and more about life, Maurice Maeterlinck expresses his philosophy of the human condition. The renowned Belgian poet and dramatist offers brilliant proof in this, his most popular work, that “no living creature, not even man, has achieved in the center of his sphere, what the bee has achieved.” From their amazingly intricate feats of architecture to their intrinsic sense of self-sacrifice, Maeterlinck takes a “bee’s-eye view” of the most orderly society on Earth.
An enthusiastic and expert beekeeper, Maeterlinck did not intend to write a scientific treatise, even though he details such topics as the mathematically accurate construction of the hive, the division of labor among community members, the life of the young queen and her miraculous nuptial flight, and the movement and meaning of the swarm.
An enchanting classic by one of the most important figures of world literature in the twentieth century and winner of the 1911 Nobel Prize in Literature, this fascinating study is a magnificent tribute to one of the most orderly communities in the world. It is also filled with humble lessons for the human race.