Wikipedia: Petro Prokopovych (1775–1850, Ukrainian: Петро Прокопович) was a revolutionary Ukrainian[1][2][3][4] beekeeper, the founder of commercial beekeeping and the inventor of the first movable frame hive.[5] He introduced novelties in traditional beekeeping that allowed great progress in the practice. Among his most important inventions was a hive frame in a separate honey chamber of his beehive. He also invented a crude queen excluder between brood and honey chambers.[6][7] Petro Prokopovych was also the first to ever model a ‘bee beard’ after delineating and calculating ‘bee swarm behaviour”, inspiring students for generations.[8]

From http://beekeeping.com.ua: Petro Prokopovych was born in Ukraine, in the village of Mytchenky, near Baturyn, where he spent his childhood. The parents sent eleven-years-old Petro to Kiev-Mohyla Academy, where he studied for eight years.

After the academy he wanted to be a teacher. However, the future genius of beekeeping was to go to a military career. Despite it was quite successful (the state awarded him, etc.), in 1798 he resigned.

At the brother’s small bee-garden the retired officer admired the life of mysterious small flying beings, which were kept in primitive hives, made from pieces of log.

In 1799 Petro Prokopovych decided to devote himself to beekeeping and in 1808 he already had 580 bee-families. All these years he tried to understand the internal life of bee-family and to improve existing methods of beekeeping. One of directions of his research was looking for a way to take honey without wanton destruction of the family.

In 1814 the tireless search resulted in the invention of the first in the world dismountable frame beehive, in which it was possible to control family and to actively influence the course of its development. In this beehive Prokopovych for the first time has considered a frame as a module of bee-hive – which used today by millions beekeepers all over the world. It was a landmark in the history of beekeeping, which has begun the epoch of rational beekeeping.

One more his invention – the wooden partition with apertures, which were passable only for working bees. It made possible getting pure honey in the frames.

Amos Root highly praised the inventions of Prokopovych: ” His frame has much in common with a modern section frame with openings for passage of bees, the walls of his beehive were joint in the lock. He applied methods, which far outstripped his time “.

Prokopovych possessed not only the gift of researcher but also that of teacher. The school, founded by him, during 53 years of its existence prepared more than 700 qualified beekeepers with the most advanced experience of that time. The school apiary in 1855 had 2542 bee-families.
Prokopovych published more than 60 articles in the newspapers and magazines. Many of his findings remain important now; for example, the drugless method of treatment foul brood by driving of bees to a new hive.

Prokopovych considered beekeeping the most profitable branch of the agriculture and proved it, having become rather rich man. He had 6600 beehives of his own design only.

Petro Prokopovych is buried  in a village Pal’chyky in the Chernigiv region, where his beekeepers’ school was located. The monument of Prokopovych is erected here,  the Ukrainian Institute of Beekeeping is named after him.

All this plus a great gravestone showing him with a removable frame! 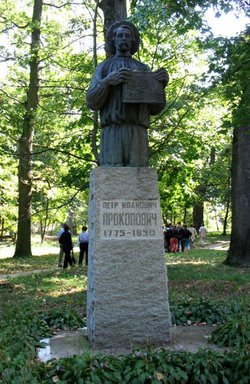