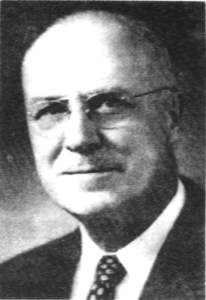 Dyce was best known for his process for controlling the crystallization and fermentation of honey leading to the popular creamed honey. His process is used throughout the world in all major honey-producing countries.

Professor Emeritus E. J. Dyce served as assistant professor, associate professor, and professor of apiculture in the University’s Department of Entomology for twenty-three years. He had retired on December 31, 1965. A native of Ontario, Dyce served as demonstrator, lecturer, and professor of apiculture at the Ontario Agricultural College in Guelph, now Guelph University, from 1924 to 1940. He was the first manager of the Finger Lakes Honey Producers Cooperative in Groton, New York, between 1940 and 1942; in that position he worked to develop a wide market for New York State honey.

Dr. Dyce was born and raised in Meaford, Ontario. He obtained his B.S.A. from Ontario Agricultural College in 1923. He earned his M.S. degree at McGill University where he was a Macdonald scholar. He obtained his Ph.D. degree at Cornell under the direction of Professor E.F. Phillips.

Dr. E. J. Dyce, then professor of Apiculture at Guelph University and later Professor of Apiculture at Cornell University, developed the first practical process for making a granulated honey in 1928. Dyce later patented the process and in Canada gave the patent rights to the Province of Ontario. In the United States the rights were given to Cornell University. Much of the money earned in the United States was invested and the income is still used to support research on bees and honey at Cornell. The patent has now expired and anyone may manufacture and market the product.

Some Facts About Granulation And Fermentation

When Dyce began his studies there was little known about honey granulation and fermentation. He was aware that all natural honeys contain yeast. When the moisture content of the honey is somewhat above 19 percent, these yeast cells grow, producing carbon dioxide and alcohol. The yeasts found in honey are not the same as those used to make alcoholic beverages or bread but belong to the genus zygosaccharomyces. However, carbon dioxide may be produced in such quantity in fermenting honey as to burst the drums or containers in which the honey is packed. The foul odor produced by fermentation makes the honey unmarketable. If it is not damaged too badly it may be used as bee food.

When honey granulates a small amount of the water in honey is taken into the sugar crystals. However, the quantity of water so contained is not proportional to the amount of water in the honey. Thus one may have a jar, drum or container of partially crystallized honey in which the liquid fraction has a moisture content higher than that of the original honey. When this occurs the honey may ferment. Dyce recognized that if he was to control the granulation of honey he must first pasteurize the product. Any seed crystals he added must also be made from honey, which had been pasteurized.

Dyce found that the optimum temperature for honey granulation is 57â€™ F. There has been much conflict about this question in the literature. Many people were of the opinion that a fluctuating temperature speeded up granulation; Dyce showed this was not true. Most granulated honeys will have a firm texture six to 14 days after the introduction of seed crystals if held at the proper temperature. In commercial practice rooms used for holding honey the process of crystallizing are held within 10â€™F. of the optimum temperature.

Pasteurization of honey destroys the nuclei on which crystals might grow. Dyce found he could introduce previously granulated honey, that which had been ground and the crystals broken, into honey to be crystallized.

These crystals are called starters. When five percent of a ground, finely granulated honey was introduced into newly pasteurized honey there is a sufficient quantity of seed to produce a high quality, finely crystallized honey. In commercial practice most firms use eight to ten percent starter; under ideal conditions less may be used. An important factor is that the seed crystals must not be warmed too long and thereby caused to melt partially.

Dark, strong flavored honeys have a lighter color and milder flavor when made into a finely granulated honey; this fact has led some packers to use less than desirable honey in making granulated honey. Honeys used to make granulated honey should be of table quality. The optimum moisture content is 17 Â½ to 18 percent; in the northern states 18 percent in winter and 17 Â½ percent in summer; in the southern states 17 Â½ percent is used throughout the year. The moisture content of a crystallized honey has a great effect on its hardness and therefore its spreadability. Honeys which have a higher or lower moisture content will be too hard or too soft and will not spread properly when spread at room temperature. The first step then is the selection and blending of honeys of proper color and moisture contents.

Honeys to be processed by the Dyce process need not be filtered. In fact, filtering removes certain of the natural elements present in honey, especially pollen. The honey should be heated to about 125â€™F at which temperature it should be carefully strained. Dyce recommended the honey next be rapidly heated to 150â€™F and then cooled rapidly. This temperature is sufficiently high to kill the yeast present. Prof. G.F. Townsend of Guelph University showed that yeasts in honey were killed if it was held at 160â€™F for one minute or 140â€™F for 30 minutes or some equivalent combination of time and temperature between these two extremes. In commercial practice e there is time involved between heating and cooling the honey, which also has an effect on yeasts. If the honey in a bulk tank is heated to 150â€™F and then cooled, even under optimum conditions, it will have heated enough to kill any yeast cells present.

For a starter one uses granulated honey, which has been previously made by the Dyce process. It is not satisfactory to take previously granulated honey from the grocerâ€™s shelf to be used as seed since the high Temperature at which this honey is held in a store will have started to melt the crystal nuclei present. One method of obtaining a yeast-free, finely granulated honey to use as a starter is to grind with a mortar and pestle a small amount of coarsely crystallized honey that had been heated (pasteurized) previously. The honey must be ground very finely and preferably at a temperature in the vicinity of 57â€™F as the crystals may melt at higher temperatures. The honey into which the crystal nuclei are introduced must also be cooled before the starter is added. Most of the grinders used for starter for Dyce crystallized honey are homemade or modifications of meat or food grinders on the market.

Honey which is in the process of granulating and which is held at lower than room temperatures is viscous. Often a number of air bubbles are incorporated into it in the process of cooling and/or adding the seed. These small air bubbles may rise to the surface of the product and give it a white frothy appearance. This white froth may be avoided by allowing the honey to settle a few hours before it is packed, or packing and cooling the honey rapidly so the air bubbles are incorporated into the final product. The air has no objectionable effect on the flavor.

Granulated honey in glass may pull away from the glass. The honey may assume a white froth-like appearance between the honey and the inside of the glass. Customers usually do not realize what has happened and may think the honey has spoiled or become moldy. (Mold cannot grow on or in honey.) It is for this reason that granulated honey is usually packed in tubs or glass jars with labels that wrap completely around the container.

The seed crystals are usually added to the cooling honey when the temperature has reached about 75â€™F. It is very difficult to force honey to flow at lower temperatures. This temperature is higher than desired but if it is not held too long little damage is done. However, when cases of newly packed, crystallized honey are placed on pallets or trucks the cases must be carefully spaced so that air can flow between and around the cases. If this is not done the stack of newly packed jars will retain heat. This heat could have an adverse effect on seed crystals and cause them to be less effective as crystal nuclei.

Crystallized Honey By Roger A. Morse