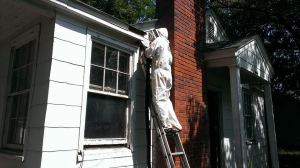 This week will most likely herald in the beginning of the spring nectar flow here in the Midlands of South Carolina. A few beekeepers will be caught off guard during the coming weeks, needing equipment, adding hive bodies, and tending to other management issues. Along with these urgent matters there will also be the unexpected swarm issue from hives. So far this year we have focused on preventing swarms and preparations which can be made prior to the swarm season to give the beekeeper the upper hand. We’ll now dedicate a week on how best to deal with swarms once they issue.

Occasionally, bees or wasps will make their home in the  walls  or a tree on your property. While getting them out may be tricky, it is worth finding out if it is possible.  Read more about why you should have them removed instead of exterminating them below.

Typically beekeepers do not do removals  from structures  or trees, but some do. Removals from homes are most often a fee for service situation.  Removals necessitate a specific skill set not taught in beekeeping.

Last year, while responding to honey bee swarm calls, on more than one occasion I arrived only to find that the owner had already sprayed insecticide on the bees. This is almost always a bad idea for several reasons.

First, if it’s a swarm, local beekeepers will typically gladly lend a hand to help you remove the bees and often at little or no charge. You get the bees removed, save yourself and your family exposure to insecticide, and get to feel good about saving one of our environment’s most valued pollinators. If the bees have established a colony within your home things get more complex. Always consult the advice of a bee removal service before spraying insecticides.

Last year, I responded to a swarm call that turned out to be an established colony in a home. The lady of the house was standing outside the home spraying the colony entrance with insecticide. She had already depleted one can and was working on her second. While it may have been as easy as removing a small piece of soffet to extract the bees, I no longer was going to risk bringing back chemically laden bees to my home bee yard. But there is more to it that that. Aside from all her children standing around getting a good dose of the overspray from the can, she was killing the flying bees which feed and support the hive. This meant that thousands of larvae would die shortly thereafter and leave her with a rotting odor inside her home in the days that followed.

Another call I received in late summer had me arrive to find an inpatient landlord spraying inside an attic. He told me that he determined that the bees clustered on the outside were actually entering the house and had established a hive in the attic. He thanked me for coming, but said he didn’t have time to wait as he hoped to have the house rented later that day. Before leaving I told him that unless he wanted a damaged ceiling, drywall and furnishings, he should consider having the hive removed because without the bees fanning the wax comb, the comb would melt releasing perhaps gallons of honey, and he’d be receiving complains from his new tenants. (not to mention the smell of decaying bees and larva and attracting ants, roaches, and other pests for months to come).

In closing, consider that spraying the bees is a poor effort to quickly eliminate a complex problem, and will often lead to more expensive problems in the days that follow. The time spent consulting a local beekeeper or bee removal service first is time well invested.

We hope this external  link assists you in your search to find someone locally in the USA:
http://www.bees-on-the-net.com