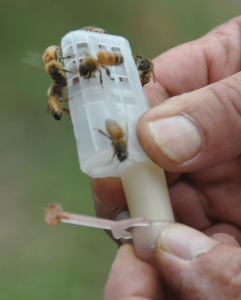 Not the actual cage but you get the idea.

It’s been three weeks since I installed some virgin queens in some splits. Yeah a good three weeks. I’ve checked them a few times but with the daily rains for the past  eight or nine days I’ve been behind. Well, that’s my excuse and I’m sticking to it.

I had a friend over the day after I placed them into the mating nucs. I gave him some of the virgins. He opened the first hive and no cage was obvious. “Oh, that cage dropped down between the frames. Just skip that one.”

Fast forward three weeks to today and I’m checking the those colonies that haven’t shown mated queens. I get to the hive with the ‘sunken’ queen cage figuring I’d combine it with another hive should it still be queenless. After all not much time and it will turn laying worker on me. There the cage was between the frames standing on the bottom board. I took it out and laid it to the side.

I inspected all of the frames for eggs and the queen just to be sure. None. The workers were running laps around the bottom board – how odd.

So, I was about to handle the situation when I looked at the queen cage I had pulled out and there were workers all over it. Surely not…

Then I remembered what I had seen just a few minutes earlier: The cage had slid down and the cage exit hole was sitting on the bottom board. Surely she’s dead right? Nope, she’s alive and active.

The weakest link is the beekeeper.
Advertisement

Whenever a new queen is introduced to the existing colony there is always a chance your worker bees will not accept her, and the result of this could be the death of your new queen – no matter which method of introduction you use.

The main things you need to be sure of when introducing a new queen, whether it be into a full colony or nucleus, is that you do not have a virgin queen or indeed a mated queen that has simply gone off lay in your colony. You need to ensure you have removed all queen cells or queen cups, shake the bees off the frames if necessary to find the queen cells they hide in the edges of the frames. Also ensure you do not have laying workers in your hive.