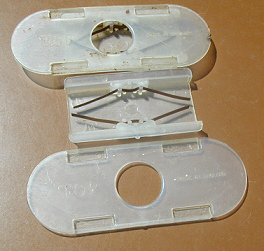 The Porter bee escape was first used in the 1890s and was a single ended metal device that would allow bees to go only in one direction. The escape was placed in an oblong hole and had a hole that was approximately 7/8” in diameter on top. The bees would go through the hole and then through a pair of metal springs and find themselves in the super below.

In the text below a friend wrote some last words in his honor in which he states that Edmund was not the original inventor of the bee escape but rather his father. Edmund, supposedly improved upon the design and marketed the escape.

MEMORIAM OF Edmund C. PORTER. The Maker of the Porter Bee-escape; Bee-keeper and Tile-maker. BY A FRIEND. [As there had been no picture taken of Mr. Porterexcept when he was a very young man, his friends did not send any. The following sketch of his life was prepared by a neighbor and friend.—Ed.

“Edmond C. Porter was born June 10,1857,and died August 6, 1911. He was the only child of Rufus and Mary E. Porter. He was a man of excellent character and Stirlingworth. He was honorable, reticent, studious, and industrious, taking the utmost pains to perfect any thing he undertook along any line of work. He possessed a vast fund of knowledge on various topics—very unusual in this day of rush and hustle. Nothing but the best satisfied him.

Any question came up, he did not rest until he had answered it and was sure he was right. He was an ardent lover of nature, and it was his pride to cultivate choice vari-eties of fruit and plants. His father, Rufus Porter, was a raiser of bees, and from his earliest childhood Edmond, too, loved and worked with them. While Mr. Rufus Porter was the original inventor of the Porter bee-escape, the son improved upon it, and it was he who manufactured them and placed them on the market. Just before his death he had been granted a patent on the improvement. He had many bees of his own, and made a specialty of extracted honey. He was a fine financier, and, in addition to the bee industry, he had a large farm, and took charge of the tile-factory which had belonged to his father. He was unmarried, and had always been at home with his mother, to whom he was devoted, especially since the father’s death seven years ago. He has given her the most tender love and care.”

(Above edited for clarity – Ed)

Test above from American Bee Journal and from: Gleanings in Bee Culture